You are here: Home » General » The Downside of Today’s Energy Drinks

The Downside of Today’s Energy Drinks

Energy drinks have been steadily increasing in popularity over the last two decades. Once a niche market dominated by Red Bull, today almost every single beverage company in the world has some sort of energy drink offering. Along with their increased popularity is a coinciding rise in energy drink–associated emergency department visits and deaths, which has led to questions about how safe they really are. In a review of energy drink–associated adverse cardiovascular events, abnormal heart rhythms such as atrial and ventricular fibrillation, blood pressure elevation, and QT prolongation have been reported. Where most energy drinks used to be marketed towards extreme athletes looking for that extra boost during competition or college students trying to get an all night study session in for an exam, there are now energy drinks being marketed as offering a boost in physical and mental awareness, more often than not being marketed towards children and teens. 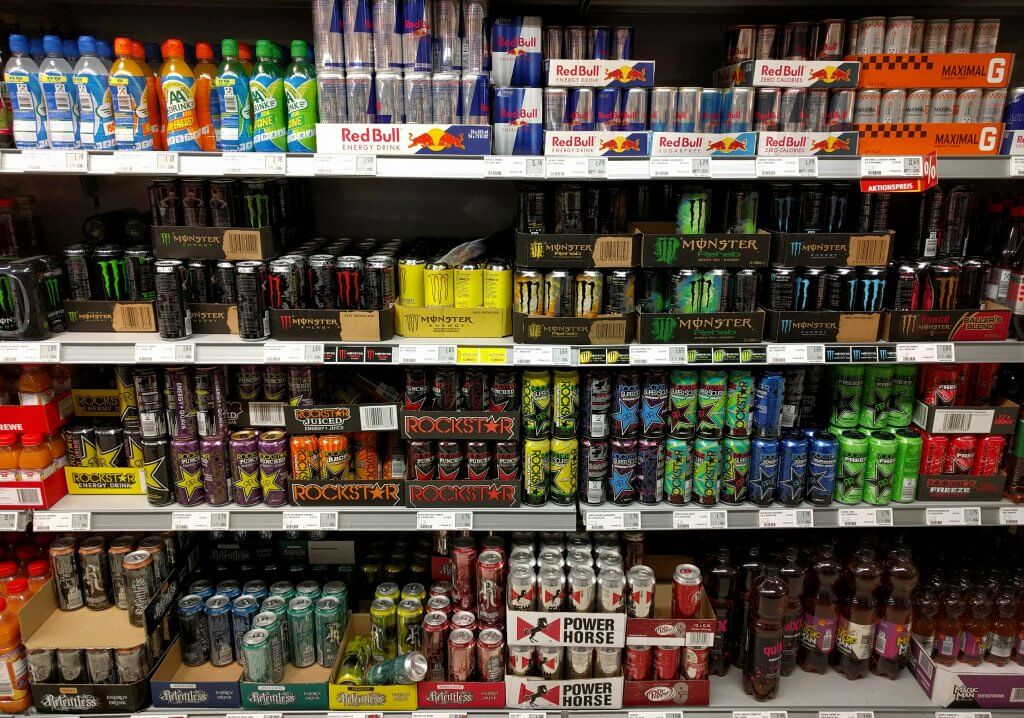 Just a few of the energy drink choices you will find at your supermarket.

A recent study done by the Journal of Nutrition Education and Behavior suggests that energy drinks are more heavily marketed on TV channels geared towards adolescents. The marketing often portrays the energy drinks as offering a “buzz” or jolt of energy that is often appealing to kids. I remember when I was a kid and Surge came out in the 90’s, it was the “cool” thing with how much caffeine and sugar it had in it (69 mg per can, which is now only considered moderate) and the resulting jolt of energy.  Now, even the seriously caffeinated sodas like Mountain Dew have “high energy” versions of the product for sale. With so many options on the market, more people are drinking less coffee and sodas and looking to energy drinks for more of a boost, especially younger people. 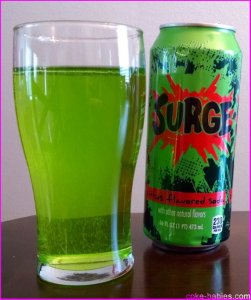 Although there is a lot of caffeine in today’s energy drinks, caffeine is not the worst part of this situation. Caffeine has been around for centuries and is generally recognized as safe in doses less than 400 mg by the Food and Drug Administration. A typical cup of coffee contains around 100 mg of caffeine and people have been consuming coffee for centuries without some of the issues now being associated with energy drinks. The main issue lies with the other compounds that are added to these energy drinks such as:

A study conducted by researchers at the David Grant Medical Center and published in Journal of the American Heart Association looked into the effects that energy drinks have on your body compared to just caffeinated beverages. The study looked at a group of healthy men and women between 18 and 40 years of age at the Tavis Air Force Base in California. This  randomized, double‐blind, caffeine‐controlled, crossover study used a computer‐generated randomization code, and participants were assigned to consume either a 1‐time 32‐ounce dose of a commercially available energy drink (containing  320 mg of caffeine ,108 g of sugar, vitamin B2, vitamin B3, vitamin B6, and vitamin B12, and a proprietary energy blend of taurine, panax ginseng extract, L‐carnitine,  glucuronolactone, inositol, guarana extract, and maltodextrin) or a matching 32‐ounce control drink containing 320 mg of caffeine, 40 mL of lime juice, and 140 mL of cherry syrup in carbonated water.

In addition to those findings, over 80% of all participants experienced adverse effects after consuming the beverages. Adverse effects included anxiety, difficulty in falling asleep, dizziness, dyspepsia/upset stomach, epistaxis, headache, jitteriness, nausea, palpitations, and shortness of breath.

All of this information definitely warrants more research into the way that the compounds added to energy drinks affect the way your body processes caffeine. It is safe to say that energy drink consumption, especially in children, can obviously lead to hyperactivity, higher blood pressure and potentially other health issues. Also, older people or anyone with high blood pressure issues or any kind of arrhythmia or heart conditions should stay away from energy drinks. If you are feeling like you have low energy levels, there are plenty of natural, non caffeine/energy drink methods

Curious about caffeine levels in different products? Check out this page to reference see how much caffeine is in your proffered beverages! Caffeine Chart

All information sourced from:

← Auto Accidents – Do You Know Your Coverage? (previous entry)
(next entry) CBD: What’s all the hype about? →
© 2021 Moore Chiropractic